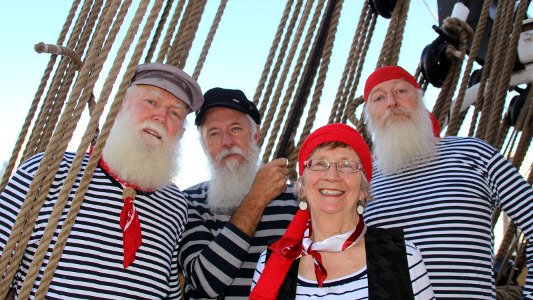 They are regulars on the Australian folk festival circuit and have toured in the United Kingdom, Europe, the United States, New Zealand and Norfolk Island.

The Forties are always reinventing themselves, but some things remain constant – the enjoyment they get from singing harmonies and encouraging audience participation.

[They] sing songs of maritime and mayhem, maidens fair and sporty
Old hymns and worksongs and the like, [they] are the Roaring Forties!

If you’re looking for the English sea shanty group called The Roaring Forties, you’ll find them here. Note that the Sydney group has used the name since 1988 and those youngsters formed in 1995!

If you’d like to learn about the area between latitudes 40°S and 50°S where reliably strong westerly winds provided a quick trip for east-bound sailing ships, try Wikipedia.

Posted on Feb 5, 2013, in General and tagged about. Bookmark the permalink. Leave a comment.

This site uses Akismet to reduce spam. Learn how your comment data is processed.