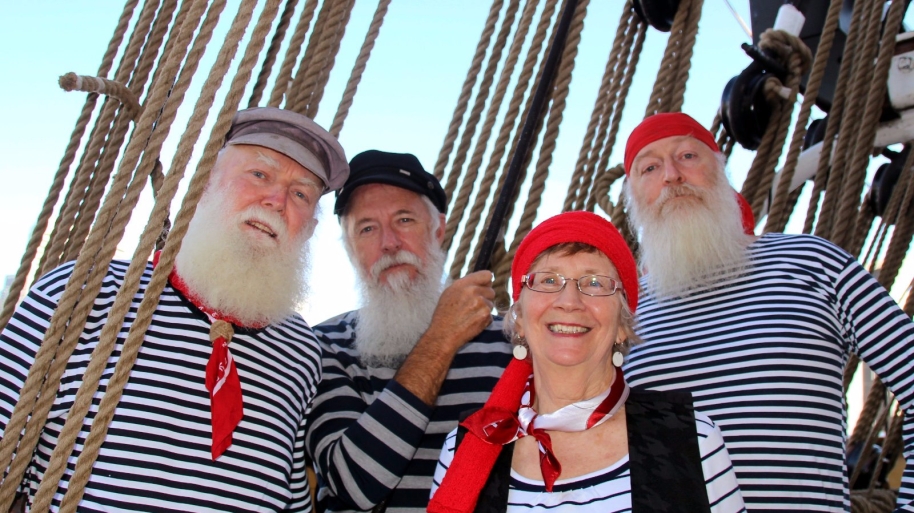 Forty Degrees South (40°S) is a Sydney-based folk group renowned since 1988 for making a powerful impact when singing unaccompanied traditional songs. They were previously “The Roaring Forties”.

The group is made up of strong individual singers and the vigour and interplay of their combined voices makes for a distinctive sound.

Sea shanties and other songs of maritime and industrial history and union songs feature large in their repertoire, songs with a robust quality that tell of real people, their lives and work.

Much of their material has been honed by generations of folk singers; other songs are contemporary – some are accompanied – but composed with respect for the tradition.

Recordings at a glance:
(Use the CD tab to link to reviews, track listings, notes, sound bites, how to order.)

The Forties’ latest CD, We Made the Steel was recorded in 2012; it is a collection of 23 original songs inspired by Robin Connaughton’s time at Port Kembla and Newcastle working for John Lysaghts. The songs – mostly by Robin but a few by or with John Warner – describe episodes of danger, mischief and ratbaggery, starkly contrasting with a deeply compassionate look at the industry’s impact on its workers and the indigenous inhabitants of the region. The CD spans a variety of musical styles as well as the spoken word.

Prior to that came the CD of sea shanties and forebitters, Life of Brine, featuring a good proportion of material with Australian connections and settings of poems by Cicely Fox-Smith.

Yarri of Wiradjuri tells the moving story of the great flood on the Murrumbidgee in 1852 that destroyed the original township of Gundagai in a song and verse cycle by John Warner.

Shore Leave doesn’t strive for a theme but showcases ship-fulls of bloody good chorus songs. Their first recording – Hazard, Hardship and Damned Little Pay – signalled the birth of the Roaring Forties in 1988 – doing what they love best – singing sea shanties.

Besides giving concerts on the themes covered by their recordings, the Forties have presented a number of interesting workshops/theme concerts over the years:

The Forties are happy to perform in unamplified venues and they’re great at hosting singing sessions.