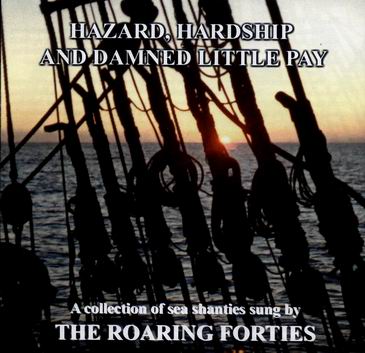 Hazard, hardship and damned little pay – this was the lot of a seaman in the driving days of nineteenth-century commercial sailing. Yet from these times we find the most remarkable work music in the English language – the Sea Shanties. The rhythms fitted the work and the words suited the sailors.

This CD features 23 sea shanties and sea songs, just under 60 minutes worth, sung by The Roaring Forties in front of a select audience in a special broadcast of the program “Ryder Round Folk” on 2MBS-FM on 16th July, 1988. Dermott Ryder provided the time and opportunity, and Graham McDonald was the engineer.

The members of The Roaring Forties present on this occasion were: Robin Connaughton, Brian Grayson, Tom Hanson, Len Neary, Tony Cochrane and Margaret Walters – see below for more information about this motley crew.

The songs number a few old favourites and some songs than have not been recorded before in Australia. They are mainly traditional and mainly sea shanties. A traditional sea shanty is one that would have actually been sung as an accompaniment to the strenuous work on board the sailing vessels that plied the Atlantic between 1815 and 1870; work like heaving at the capstan, hauling on the yardarms, bunting (lifting the sails back up onto the yardarms), manning the pumps etc. Owners found that the men worked harder and faster when their efforts were synchronised by the rhythm of a call-and-response type song, and a good shantyman was worth a dozen willing hands. “When the men sing right, the ship goes right” was the old sea adage.

The different jobs usually required a specific type of rhythm, so you find the sea shanties described as “halyard”, “capstan” or “windlass” shanties etc. So the long heaving tasks were more likely to be accompanied by a song with a narrative to divert the crew (eg “We’re all bound to go” or “Won’t you go my way”). Short, but strenuous jobs like sweating up the braces required just a few calls and the gang joining in with a grunted exhalation (eg “Royal Artillery Man”).

Because they were WORK songs, the shanties would not normally have been sung when the sailors were at leisure below decks or on shore. The songs they sang at these times were called forebitters because they were sung in the forebitts of the ship, ie in the bow, where the crew had their quarters. Some forebitters paid tribute to famous sea dogs (“Admiral Benbow”); and some looked forward to the pleasures of a more congenial climate (“Rolling Down to old Maui”), etc. The only non-traditional song on the tape is “Roll Down”, a song written by Peter Bellamy for the ballad opera, “The Transports”.

The sea shanties started to die out with the advent of the steam ship in 1870, and today they are sung simply for pleasure – no doubt with the addition of more harmonies than the sailors would have used – but still with great respect for the sailors who created these wonderful lusty songs.

And, what is quite fascinating about sea shanties, and what makes them so satisfying to sing is the diversity of musical styles and rhythms within the basic call-and-response framework.